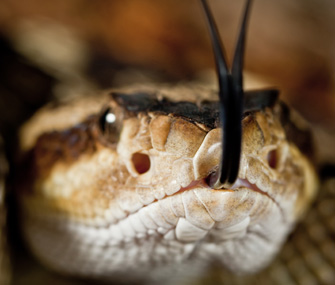 Few things strike fear in the human heart like the possibility of a snake bite. And of all the snakes, the rattlesnake is probably the most terror inducing. Dogs, especially those who live in the southwestern part of the United States, can encounter rattlesnakes on walks or in their yards. Though dogs also have a natural fear of snakes, an overly curious dog can get bitten and a rattlesnake can strike without first being seen. The rattlesnake vaccine reduces the effects of a western diamondback rattlesnake bite and may also protect against the venom of other snakes.

Rattlesnake bites are painful and the injected venom can result in tissue swelling, impaired blood clotting, shock, and sometimes death. Treatment may include antivenin (a serum that neutralizes the venom), pain medications, IV fluids, and antibiotics to control secondary infections. But even if the pet recovers there may be long-term complications.

Luckily, vaccination is now available to help prevent the severity of the envenomation.

The vaccine works by creating protective antibodies that help neutralize venom, so dogs experience less pain and swelling after a snake bite. Dogs that are bitten may also require less antivenin, which can be fairly costly and may produce side effects. Factors that can influence the effectiveness of the vaccine include the location of the bite, the type of snake, and the amount of venom injected.

While your veterinarian is always in the best position to advise you on individual vaccination decisions, some guidelines are on offer for dogs at risk of rattlesnake envenomation:

After the first vaccination the dog should receive a booster approximately one month later, followed by annual boosters in the spring before peak rattlesnake season. The vaccine’s protective effect is most evident four to six weeks after vaccination, and declines over time. Dogs that are exposed to rattlesnakes for more than six months of the year may require boosters twice a year.

All rattlesnake vaccines will be discounted 20% for the month of April.  These appointment book fast so contact us and set up your appointment soon.